5 Things Kermit the Frog Can Teach Us about Life

My favorite meme of 2014 was Kermit the Frog. Those closest to me know that I will turn ANYTHING into a Kermit meme. Say something crazy, and I will pick up my imaginary cup of Lipton tea to say that the craziness is none of my business. My husband, a comedian in his own right, even joins in on the fun by occasionally pursing his lips and transforming his cups of coffee into “Kermit tea.” Of course, we laugh uncontrollably at our Kermit antics. Although I joke about Kermit a lot, professionals can learn much from Kermit the Frog and his memes. In true Monica Cox fashion, allow me to share my top 5 Kermit lessons with you. 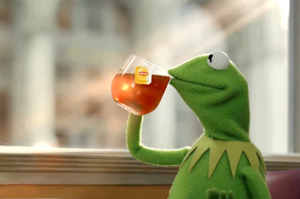 Kermit doesn’t drink Tazo, Bigelow, Teavana, or Argo tea. He sticks to the simplest brand of all- Lipton. With his precise portion of black tea in a tea bag labeled “Lipton,” he’s not ashamed to let everyone know that he is not a pretentious frog. He sticks to what he likes, and he’s not afraid to display his real self and his simple tea tastes to the world.

Kermit’s words are sharper than a knife. The minute you read his words, you want to say “oooohhhh” and shrink like a violet at the sharpness with which someone got cut by his statement. In the end, Kermit says what needs to be said and often speaks what no one is willing to say out loud. No stuttering, blinking, or apologies are needed.

Kermit is sober when he says what needs to be said, and his words are not hidden behind the guise of alcohol. This takes great courage. After he speaks his truth, however, he takes a break. This means that if and when someone wants to challenge his words, they can talk to him AFTER he drinks his brew.

Kermit’s signature phrase is, “But that’s none of my business.” Like an old Southern church lady, Kermit says what he wants to say and then has nothing more to say about it. In his own way, Kermit lets you know that he is no longer engaged in the conversation. The case is closed. Move on to the next topic.

(5) Know a little about everything.

Kermit is a cosmopolitan frog. Whether the topic is ebola, dating, or money, Kermit has a point of view. This means that he can stand before both commoners and kings to speak his truth.

In sum, we could learn much from Kermit. He keeps it real, yet knows how to party. At the end of the day, however, he’s a frog who deliberately engages with those around him. We should do the same.